Mini Sumo Rules 2019
Mini Sumo
Short Description:
As in the traditional Japanese martial arts, the robots try to push the competitor off the ring.
For Mini Sumo category will compete only participants that are over 18 years old, including the ones that are part of robotic clubs, or participants on their own.
Changelog
04.02.2018
3.2. Dohyo Specifications
- added Shikiri-Sen (starting lines)
- demonstrative picture
4.1. Robot Placing
- changed the robot placement at start
- demonstrative picture
6.1. The match shall be stopped and a rematch started under the following conditions:
- added restart rule E.
13.10.2017
3.6. Homologation
- change the rules for homologation
17.07.2017
3.5. Course of the Competition
Important!!! One person can be operator for maximum 2 robots.
If you are called to play and you don't come in 5 minutes the robot is desqulified!!!.
08.04.2017
6.1.The match shall be stopped and a rematch started under the following conditions.
added important conditions for restart
01.05.2016
2.2. Robot Restrictions
3.5. Course of the Competition
4.Start, Stop, Resume, End a Match
7.3. Minor Violations
Appendix 2 - Team’s folder
15.10.2015
4.1. Robot placement at start - picture updated.
02.01.2014
The robot may expand.
02.02.2013
Starting procedure with IR signal.
Appendix: added links to further description of the start/stop module.
1. Definition of the Sumo Match
1.1. Definition
A match is fought between two teams, each team having one or more members. Only two team members from each team may approach the ring; The operator and the assistant will enter the game area, the other team members must watch from the audience. In accordance with the game rules (hereafter referred to as "these rules") each team competes on a Dohyo (sumo ring) with a robot that they have constructed themselves to the specifications in Section 2. The match starts at the judge's command and continuous until a contestant earns two Yuhkoh points. The judge determines the winner of the match. After the match the operator and the assistant will go to the assigned room for the challenge and wait there for the next game.
2. Requirements for Robots
2.1. General Robot Specifications
A. Any robot design is allowed, if is not subject to the limitations of section 2.2.
B. A robot must fit within a square with the side length of 10 cm (100 mm).
C. The total mass of a robot at the start of a match must be under 500g.
D. A robot may expand in size after a match begins, but must not physically separate into pieces, and must remain a single centralized robot. The robot’s feet must not expand during the match. Robots violating these restrictions shall lose the match. Screws, screw nuts, washers and other robot parts with a total mass of less than 5 g falling off from a robot's body, shall not cause the loss of match.
E. All robots must be autonomous. Any control mechanisms can be employed, as long as all components are contained within the robot and the mechanism does not interact with an external control system (human, machine, or otherwise)
F. The robots must have displayed a number, offer by the organizers, on the outer casing of the robot in a visible place. The number it is used to identify the robot by the referee and can be found in the Team's Folder (details in appendix 2).
2.2. Robot Restrictions
A. For safety reasons the robot must be equipped with an IR kill switch to be operated by the judge. When the judge sends a kill signal the power to the motors shall be shut down. The robot builder is responsible for adding such a kill switch on the robot. The technical specifications for the IR receiver are given in the appendix 1. Contestants can either implement their on hardware or use a prebuilt module offered by the organizers. This module can supply the signal for activating the kill switch.
It is mandatory that the IR start module to function and the responsibility for is entirely of the team. If the module is not on the robot or is not working the team will be disqualified from the competition. If a problem occurs with the module during a fight it is recommended and allowed to be replaced. During the homologation and in the matches the module must function properly.
B. Jamming devices, such as IR LEDs intended to saturate the opponents IR sensors, are not allowed.
C. Parts that could break or damage the ring are not allowed. Do not use parts that are intended to damage the opponent’s robot or it's operator. Normal pushes and bangs are not considered intent to damage.
D. Devices that can store liquid, powder, gas or other substances for throwing at the opponent are not allowed.
E. Any flaming devices are not allowed.
F. Devices that throw things at your opponent are not allowed.
G. Sticky substances to improve traction are not allowed. Tires and other components of the robot in contact with the ring, must not be able to pick up and hold a standard A4 paper (80 g/m2) for more than two seconds.
H. Devices to increase down force, such as a vacuum pumps and magnets are only allowed in the Mega sumo class. They are not allowed in Mini Sumo class.
I. The blade and the expansion of the robot can not be white.
3. Requirements for the Dohyo (Sumo Ring)
3.1. Dohyo Interior
The dohyo interior is defined as the playing surface surrounded by and including the border line. Anywhere outside this area is called the dohyo exterior.
3.2. Dohyo Specifications
A. The ring shall be circular made from wood with a thickness of 2-3 cm, painted in black with a diameter of 77 cm (770 mm).
B. The border line is marked as a white circular ring with a width of 2.5 cm (25 mm).
C. The Doyho will be place on a wooden surface, height 70 - 100 cm (700 - 1000 mm)
D. For all given dohyo dimensions a tolerance of 5% applies.
E. Starting Lines (Shikiri-Sen) brown color 10x1 cm (100x10 mm) 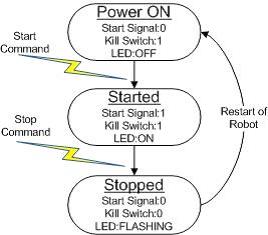 If the LED on the module is on before the referee has sent the start command it means that the module is in the “Started” state. Then the stop command has to be sent and the robot needs to restart for the module to go back to the “Power ON” state. To be able to run multiple matches next to each other each dohyo will have its own unique identifier. The prebuilt module can be re - programmed to listen for a new identifier. This is done by the referee by sending a special programming command which updates this identifier. Robots which use sensors that are based on IR technology with a 38Khz transmitter modulation are encouraged to start their sensors after the start signal is received. This is to minimize the risk of disturbance.
The Home Mode
The module has an option of usage without the special remote control. On the back of the module are 2 large pads- Home and GND. If one attaches an 1 Kohm resistance between the two pads, the module will accept signal from a standard TV remote control (the remote control that uses RC-5 coding and was developed by Philips, but there are many other companies that use the same protocol). Sony and Nec have their own protocol and the remote control will not work. The best way to test if the remote control works, is to test it with the module. Pressing the 1 button from the TV remote control will be START and 2 will be STOP.
Explanation of use
You can find detailed information about the usage of the start modules on:
http://www.startmodule.com
Recommended design for Kill Switch
How to implement Kill switch circuit using a relay
http://www.startmodule.com/kill-switch-relay/
How to implement Kill switch circuit using an optocoupler
http://www.startmodule.com/kill-switch-oc/
FAQ
For answers to the most common questions regarding the start systems.
http://www.startmodule.com/faq/
How to implement everything by your own
For those who want to implement everything by their own and not use the prebuilt module a guide for this can be found at:
http://www.startmodule.com/implement-yourself/
APPENDIX 2
Team’s folder will have the following items: